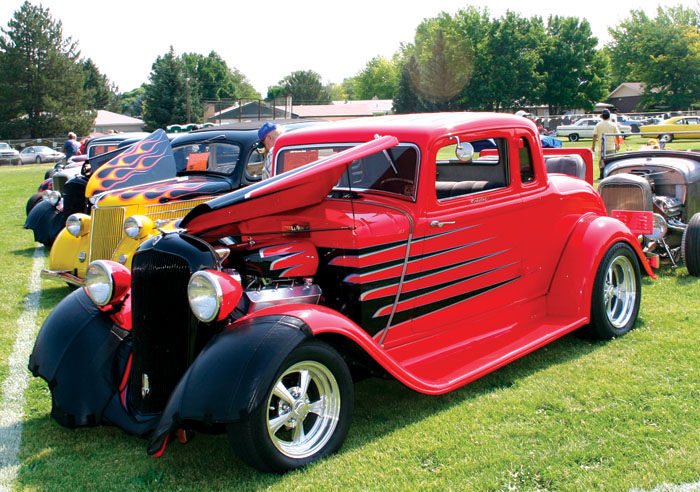 [May 2008 | San Juan Silver Stage] EAT YOUR HEART OUT PEGGY SUE! Today’s muscle car ride is as good as it ever gets…or got. And cruisin’ is still a favorite Friday night activity. Rolling along with the top down and the radio up, you may recognize some of your old friends behind the wheels of these well-loved and lovingly preserved (now) classic cars. Many of their owners are of “a certain age” from the era where you hung out at the malt shop.

But not all of them. You’ll find a few younger folks too, as much in love with these vintage cars today as you were way back then. Remember the rattle of glass packs and steel packs and the roar of 450 cubic inches? The thrust of four-on-the-floor and the thrill of draggin’ Main Street? Muscle cars—the real deal, not these little shoe-sized kiddie cars of today that look like they run on pedal power rather than horse power—are still here. And we’re still building and rebuilding them in our garages in what for many of us is part of a continuing, life-long love affair with the American automobile. Jack got his first hot rod as a sophomore in Ouray High School, a ‘52 Plymouth he bought from his sister Judy. “I stuck an old Cadillac V-8 under the hood, he says. “All kinds of performance cars and motorcycles followed— Plymouth Roadrunners, a GTX, Ford Mustangs, and a turbo-charged 1987 Buick Grand National,” his favorite, which he still has 21 years later. “It has only 43,000 miles on it,” he says proudly.

Jack bought his first Nash Metropolitan while working in Denver in the late ‘60s. Later, when his wife, Karen, wanted another one, he located two for sale in Montrose. “One was OK and the other was a disaster,” he says. “I bought both for $1800 and fully restored them in my home garage—paint and all.” Jack has since sold both Mets.
As an underground mechanic, and later a heavy equipment operator (Jack wound up Operations Supervisor for the Galloping Goose Transit System in Telluride before he retired), Jack, found it easy to work on his own cars, and he still does. He’s owned 44 so far (including the Grand National and his ‘62 ‘Vette) and probably will buy more.

“My love affair with these cars goes back to the years when muscle cars came out in the late ‘60s and early ‘70s. I was fortunate enough to be the right age at the right time.” Jack says. Wayne Mettler, Fruita, Colo.
Wayne’s dad was a mechanic and worked on cars in the family garage as a hobby. Wayne worked on them too and started racing them as a kid. “By the time I was in my early 20s, I was racing all over,” he says. “San Fernando, Long Beach, Fontana—I had a ‘55 and a ‘56 Chevy and I raced them both. ” Wayne kept it up over the years and had “many many cars over many many years.” He remembers one in particular, a ‘41 Willys Americar that made it into Hot Rod Magazine and was named “The World’s Most Beautiful Willys.”

Along the way Wayne got involved in racing and building drag boats—not too much of a jump, really. His clients still fly him “all over to races, to consult or work on their boats. Then, about six years ago, I got back into cars again,” he says. “I did a ‘69 Camaro, then a ‘56 Bel Air Post.” And now, the ‘55 210 Post pictured on the left. And, guess what? Wayne’s favorites are…a ‘55 and a ‘56 Chevy! Rob Lake, Montrose, Colo.
Owner of Mylar Auto Finishing in Montrose, Rob has spent his whole life working on cars. His dad bought Mylar from a former owner, and Rob took over from his dad. “When I was a kid,” he recalls, “we went out and collected old cans, which we sold to Dad and he used to mix paint. As far back as I can remember, we were working on cars and bikes [motorcycles], restoring them and building them.” Rob’s hot rod pictured top right, is a favorite. Like most of the men interviewed for this story, his love affair with the American automobile goes back a generation or two and shows no sign of abating.

Paul Martin, Montrose Colo.
President of Black Canyon Classic Car Club
Paul bought his first Chevy in 1970. He bought the next one ten years later. “It was a ‘55 Bel Air convertible and it sure took a lot of work,” he says. “I had a lot of help from my brother and friends. We got the first parts in 1989 and finished the car 19 years later. It’s been on the road nine years now!” Paul’s turquoise and ivory Bel Air (pictured next page) is a familiar sight around Montrose.

Paul and his wife Mary enjoy the club and camaraderie of other car buffs. Reminiscent of the ‘60s, club members go cruising Friday nights (from March through November) and get together for shows and other events. For more about the club and its activities, visit Black Canyon Classics website. Chuck Llewellyn, Montrose, Colo.
Chuck, a member of the BCCC, restored the 1931 Ford Vicky, which he purchased with just 56,000 original miles on it. After a year, he tore it apart and went to work on it. “The only original parts now are the all-steel body, the fenders, and back seat,” he says. “The front grill and dash are from a 1932 Ford. It’s got a Chevy 350 engine and a 350 Turbo transmission.” Chuck did most all of the work himself. This isn’t the first car Chuck has restored, and it probably won’t be the last. He also goes to a lot of the classic car shows, but “The Black Canyon show is the best,” he says.

Retro versions of the Ford Mustang Shelby GT, Chevy Camaro, and Dodge Challenger have appeared in the last year or so, and the 2010 versions will be even more spectacular. All have high horse power/high torque engines, manual six-speed transmissions, and beefed up braking and suspension systems.
Describing the 2010 Camaro, Ed Pepper, Chevrolet’s GM says: “The car will deliver the best of both worlds—great heritage and a thoroughly modern, advanced package of performance, comfort, and technology.” This pretty well sums it up for all three retro performance cars. Besides the technologically advanced engines and transmissions, they come with modern amenities including orchestra-quality sound systems, Bluetooth, USB connectivity, and on-board navigation systems—stuff you never dreamed of in the drive-in days.

What they don’t have is a system to prevent you from getting a killer ticket when you rip out from the neighborhood stop sign and hit 0-60 in four seconds or crank it up to 200 mph. “To drive like that,” says, Mike Vaillancourt, Turner Chevrolet, Montrose, “you have to do it on the Autobahn in Europe. They don’t have any speed limits.”

Starting price tags on restorable cars versus retro rockets are considerably lower, although restoration costs can add up quickly. But as most classic car buffs know, it’s as much fun to work on one as to drive it! Owning a muscle car, restored or retro, is not for the faint of heart (or light of wallet), but it sure can be an addictive good time… for a life time. Since we don’t have an Autobahn around here, you’ll likely be thinking restored rather than retro. The best place to start is probably the next classic car show. We’ll keep an eye out for you!

Notes: OK, this article does not champion sustainability. The cars pictured here are gas guzzlers, not green hybrids. But, they represent an era when life was sweet and our needs far less complex than they are today. For one thing, we could and did fix our own cars. Without a computer. Imagine that! Our message here is that car clubs like this one, and the vehicles owned and driven by these people are another form of sustainability – they honor our heritage and keep it alive for future generations. Of course, if you’re a car nut like we are (I grew up in working on cars and racing them), it’s all just an excuse to ‘put the pedal to the medal’ and see how far we can go before some enterprising fuzz puts and end to the fun. But meanwhile, I LOVE this job!

One of the very best exhibits we’ve seen on classic cars is the Gateway Museum, Gateway, Colorado. (South of Grand Junction, and west of Whitewater, off Hwy 50.) If you love classic cars, you MUST visit this museum. (They have annual passes, too.)

This was the cover story of the 2013 Summer issue of the San Juan Silver Stage. The publication is no longer in print, although there is still an online limited version.