TERMITES EAT IT BEFORE YOU PLAY IT!  If you know how, you can play it for 40 minutes (or longer) without taking a breath. Native to Australia, the didgeridoo is a totally unique musical instrument unlike any other, and possibly the oldest musical instrument in the world. It’s also associated with the Aboriginal concept of “Dreaming.”

An Aboriginal wind musical instrument, the didgeridoo is a long wooden flute, without finger holes, that produces a drone-like sound by blowing into it using a special breathing technique called circular breathing. Although it is similar in form to a straight trumpet, it is a flute. Made of wood instead of metal, it’s conical rather than straight, and much longer than a trumpet (or standard flute). Traditional didgeridoos are about 4 ft. in length, although some go as long as 10 feet. And of course, because it is made from wood eaten by termites, which creates its unusual and unique harmonic “drone tones,” the didgeridoo is definitely not like a trumpet or any other man-made instrument.

Because of the sound it makes, it is sometimes also called a “drone pipe.” Generally, the longer the instrument, the lower it’s pitch. Flared instruments and reticulated versions (curled and curved and somewhat resembling a French horn) produce a higher tone. The didgeridoo functions “…as an aural kaleidoscope of timbres” and “the extremely difficult virtuoso techniques developed by expert performers find no parallel elsewhere.” (Ref.: A. Baines, The Oxford Companion to Musical Instruments, OUP, 1992.)

Why do we say the didgeridoo represents the Aboriginal concept of Dreaming?” What does that actually mean? According to one source, “Aboriginal music unites consciousness with the invisible laws and energy patterns of nature…a method for gaining knowledge of nature and its invisible Dreaming. … Traditionally, an Aborigine would go into nature and listen intensely to animal sounds, not just voices but also the flapping of wings or the thump of feet on the ground. The Aborigine would also listen to the sounds of wind, thunder, trees creaking, and water running. The essences of all these sounds were played with as much accuracy as possible within the droning sound of the didgeridoo. For the Aborigine, the observation of nature immediately requires a state of empathy, which leads to an imitative expression.” (Ref.: Voices of the First Day, Published by Inner Traditional)

Learn more about the Digeridoo, hear and see it played, at Museum of the Mountain West, Friday, April 29th, when Australian storyteller, Paul Taylor, performs Wonders Down Under, 6-8 pm at the museum, 68169 Miami Rd, 3 miles east of Montrose (off Highway 50 at intersection with Miami Road).

Wonders Down Under is an interactive multifaceted performance adapted to any age level. Paul Taylor presents audiences with a unique look at the wonderful Aussie character through an exciting blend of stories, songs, dance, painting, theatre, and didgeridoo, drawing comparisons in American history and culture. Focusing on many of our cultural icons, his program honors both Aboriginal and European roots. Wonders Down Under is particularly relevant today, as it introduces audiences to the Aboriginal spiritual worldview, the “Creation Story,” which teaches us to pay attention, care for our water, care for our land, to care for our place wherever we may be. 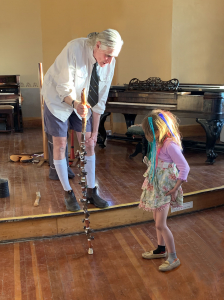 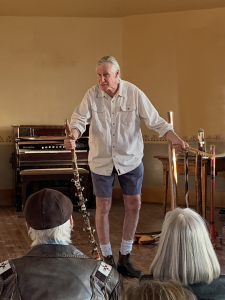 A Baines, The Oxford Companion to Musical Instruments OUP 1992

Hand-crafted teas from the Tea Lady
Scroll to top