You are here: Home1 / Rock and Roll IQ Quiz

What’s Your Rock And Roll IQ? 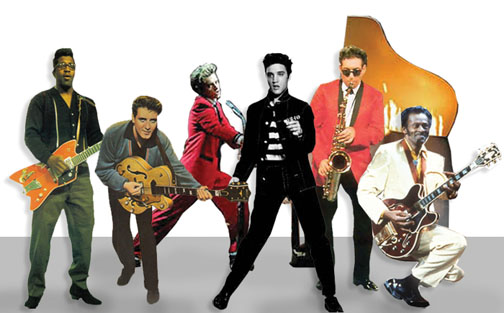 Who were these musicians?

What kind of music were they known for?

True or False? Rock and Roll was:

ALL are probably true
__ a volatile mix of post-war black culture and white spending power
__ a generational upheaval
__ an all-American, multiethnic hybrid
__ a cultural vanguard
__ the start of the Civil Rights movement
__ a musical Utopia
__ a symbol of social upheaval
__ a slang term for sex

Which of these are NOT components of R&R?

Who was NOT a prime target of R&R?

What happened to these rockers?

Bo Diddly – Died of heart failure in 2008, at his home in Fla.
Buddy Holly – Died in a plane crash in 195
Chuck Berry – Lived to be 90 and died of natural causes.
Elvis Presley – Died of prescription drug poisoning in 1977.
Fats Domino – Recovered from a serious hand injury, before becoming R&R legend. Lives in New Orleans.
Little Richard – Became a minister, still singing rock and roll!
Bill Haley – Wound up a bitter man, living in Mexico, then Texas, where he died.

Rock and Roll started in the 1950s, but a lot of hits followed over the next 20 years. How well do you know your Rock ‘n Roll? (We don’t include the Beatles here; they are their own unique genré.)